Review: Poison is Not Polite 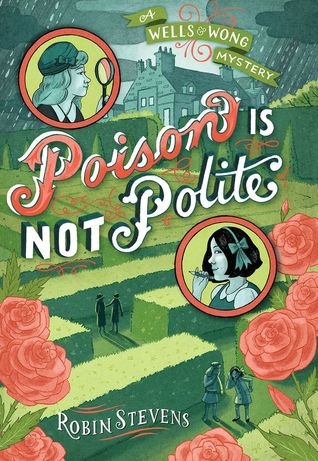 Poison is Not Polite by Robin Stevens
Grade: B+
Summary: Schoolgirl detectives Daisy Wells and Hazel Wong are at Daisy’s home, Fallingford, for the holidays. Daisy’s glamorous mother is throwing a tea party for Daisy’s birthday, and the whole family is invited, from eccentric Aunt Saskia to dashing Uncle Felix. But it soon becomes clear that this party isn’t about Daisy after all—and she is furious. But Daisy’s anger falls to the wayside when one of their guests falls seriously and mysteriously ill—and everything points to poison. It’s up to Daisy and Hazel to find out what’s really going on.
With wild storms preventing everyone from leaving, or the police from arriving, Fallingford suddenly feels like a very dangerous place to be. Not a single person present is what they seem—and everyone has a secret or two. And when someone very close to Daisy begins to act suspiciously, the Detective Society does everything they can to reveal the truth…no matter the consequences.

The Good, the Bad, and the Ugly: This is the type of middle grade I very much enjoy. Spunky protagonists who solve murders - in historical fiction!
Poison is Not Polite is set a few months after the events of Murder is Bad Manners, and it takes place over less than a week (I think). The plot moved at a good pace, and the story never dragged on. Daisy seemed a better-formed character this time around; she was still bursting with personality, but she was a little less impulsive and abrasive. I do wish Hazel would get a little more character development since she is the narrator.
I loved trying to guess who the murderer was (and my first and second guesses were wrong, y'all). Ms. Stevens doesn't make it super obvious - and there are a lot of suspects - but the murderer also wasn't a humongous plot twist that didn't make sense.
I would've liked a little more sense of setting, but I don't think younger readers would mind as much since Poison is Not Polite is rich with plot and characters.

The Verdict: The only thing missing was that extra spark to make this a 5-star read, but it is a new favorite. Definitely a series worth checking out!

Buy: Read Between the Lynes  Barnes & Noble
Will I be adding this book to my library?: I'd very much like to!
Posted by Emma at 12:00 AM
Email ThisBlogThis!Share to TwitterShare to FacebookShare to Pinterest