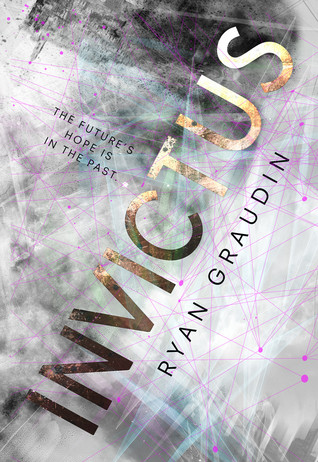 Review: Invictus by Ryan Graudin
Grade: C
Release date: September 26, 2017
An e-galley was provided by the publisher via NetGalley in exchange for an honest review.
Summary: Time flies when you're plundering history.
Farway Gaius McCarthy was born outside of time. The son of a time-traveling Recorder from 2354 AD and a gladiator living in Rome in 95 AD, Far's birth defies the laws of nature. Exploring history himself is all he's ever wanted, and after failing his final time-traveling exam, Far takes a position commanding a ship with a crew of his friends as part of a black market operation to steal valuables from the past.
But during a heist on the sinking Titanic, Far meets a mysterious girl who always seems to be one step ahead of him. Armed with knowledge that will bring Far's very existence into question, she will lead Far and his team on a race through time to discover a frightening truth: History is not as steady as it seems.
In this heart-stopping adventure, Ryan Graudin has created a fast-paced world that defies time and space.

The Good, the Bad, and the Ugly: Since I quite enjoyed Ryan Graudin's Wolf by Wolf duology, I expected to like Invictus as well. Unfortunately, it didn't meet my expectations.
I liked how the book started with Far's mother's POV and then launched into his POV right after. However, I think there was a lot of worldbuilding early on that wasn't quite clear enough. I was never quite sure how Recorders actually recorded everything, and some of the science felt a little too wobbly to me (that could also be because my mind is not built for science). And while I thought I'd like the main cast of characters (minus Eliot because she was annoying from the moment she appeared), they never seemed to be anything but surface-deep, even Far who was supposedly the protagonist. I felt like Priya and Gram would be my favorites, but I didn't get to know them well enough for them to become my favorites.
The way the ending worked out made a lot of sense, but I guess the plot in general wasn't what I wanted from Invictus, so I found myself not enjoying what I was reading, which is always a bummer.
There are substitute swears which sort of makes sense since Invictus is set 300 years in the future? But they were also a bit startling because I wasn't sure why the characters were using words like "hashing" and "shazm" in situations where those words wouldn't make sense.

The Verdict: If you're looking for a good time travel book, The Girl from Everywhere does it better.

Buy: Read Between the Lynes  Barnes & Noble
Will I be adding this book to my library?: It's unlikely.
Posted by Emma at 12:00 AM
Email ThisBlogThis!Share to TwitterShare to FacebookShare to Pinterest