Review: Murder, Magic, and What We Wore 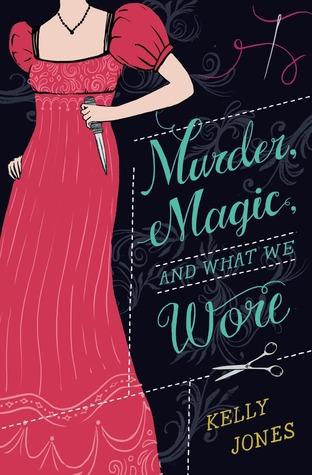 Murder, Magic, and What We Wore by Kelly Jones
Grade: B-
Release date: September 19, 2017
An e-galley was provided by Random House via NetGalley in exchange for an honest review.
Summary: The year is 1818, the city is London, and 16-year-old Annis Whitworth has just learned that her father is dead and all his money is missing. And so, of course, she decides to become a spy.
Annis always suspected that her father was himself a spy, and following in his footsteps to unmask his killer makes perfect sense. Alas, it does not make sense to England’s current spymasters—not even when Annis reveals that she has the rare magical ability to sew glamours: garments that can disguise the wearer completely.
Well, if the spies are too pigheaded to take on a young woman of quality, then Annis will take them on. And so she crafts a new double life for herself. Miss Annis Whitworth will appear to live a quiet life in a country cottage with her aunt, and Annis-in-disguise as Madame Martine, glamour artist, will open a magical dressmaking shop. That way she can earn a living, maintain her social standing, and, in her spare time, follow the coded clues her father left behind and unmask his killer.
It can’t be any harder than navigating the London social season, can it?

The Good, the Bad, and the Ugly: That title absolutely drew me to this book, and I stuck around for the historical fiction.
Characters were well-developed, and I loved how women were important to the story. Usually historical fiction is, like, one or two women and then just tons of male characters, and it's nice to see a balance. I also appreciated that there wasn't a romance because that would've meant waaaayyyy too much would've been going on. I loved that dresses and being feminine were important to the story as well. However, the magic was the most underdeveloped part of Murder, Magic, and What They Wore. I don't remember it being clearly stated at all where the magic came from and why it's kind of acceptable but not really acceptable for upper classes to use it. There was mention of other types of magic, but those were never fully expounded upon either. The ending was also a bit more open than I expected, and I'm not sure if this is a series or not. If it is, I'm excited to see where it'll go, and I hope the magic will be further explained.
Language, violence, and romance were all pretty clean.

The Verdict: A fun read, but not developed enough.

Buy: Read Between the Lynes  Barnes & Noble
Will I be adding this book to my library?: Hmm...it's unlikely.
Posted by Emma at 12:00 AM
Email ThisBlogThis!Share to TwitterShare to FacebookShare to Pinterest