Review: Not Now, Not Ever 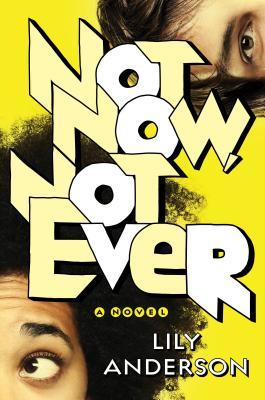 Not Now, Not Ever by Lily Anderson
Grade: A+
Release date: November 21, 2017
An e-galley was provided by Wednesday Books via NetGalley in exchange for an honest review.
Summary: Elliot Gabaroche is very clear on what she isn't going to do this summer.
1. She isn't going to stay home in Sacramento, where she'd have to sit through her stepmother's sixth community theater production of The Importance of Being Earnest.
2. She isn't going to mock trial camp at UCLA.
3. And she certainly isn't going to the Air Force summer program on her mother's base in Colorado Springs. As cool as it would be to live-action-role-play Ender's Game, Ellie's seen three generations of her family go through USAF boot camp up close, and she knows that it's much less Luke/Yoda/"feel the force," and much more one hundred push-ups on three days of no sleep. And that just isn't appealing, no matter how many Xenomorphs from Alien she'd be able to defeat afterwards.
What she is going to do is pack up her attitude, her favorite Octavia Butler novels, and her Jordans, and go to summer camp. Specifically, a cutthroat academic-decathlon-like competition for a full scholarship to Rayevich College, the only college with a Science Fiction Literature program. And she's going to start over as Ever Lawrence, on her own terms, without the shadow of all her family’s expectations. Because why do what’s expected of you when you can fight other genius nerds to the death for a shot at the dream you’re sure your family will consider a complete waste of time?
This summer's going to be great.

The Good, the Bad, and the Ugly: While I'm not sure Lily can ever top The Only Thing Worse Than Me Is You, her sophomore novel, Not Now, Not Ever, is just as wonderful. It is nerdy and swoony and funny in all the best ways.
It took me a teeny bit of time to get used to Ever, but her voice is distinct from TOTWTMIY's protagonist, Trixie. She isn't used to having friends or knowing she's smart, but she's just as driven and she's tentative about letting emotions get in the way of her goals. She's just as nerdy as the TOTWTMIY gang, except her knowledge revolves around science fiction, not pop culture. Her roommate is a ball of fun and so sweet, and I'm glad there was no cattiness between them. And y'all, I thought Brandon was adorable in TOTWTMIY, but he's even better here now that he's a senior and sharing the spotlight. He's still tentative and shy but a little less so, and his personality really shines. He is precious and wonderful and totally going on my list of book boyfriends. Although his and Ever's relationship moved a little fast, it never felt like insta-love - just friendship and attraction. Also, I loved all the cameos from the other characters. Some are more prominent than others, and some have grown beards (which I find hilarious). (Also it turns out Cornell is black, and I feel so bad for assuming he was white during the whole course of TOTWTMIY.)
The plot revolves around another academic mystery, and the answer to this one definitely surprised me, and I didn't see it coming.
My only real problem with NNNE was that the ending felt a teeny bit rushed, and it lacked a certain resolution, especially because I felt certain Ever's parents wouldn't let her go to Rayevich if she didn't have a full-ride scholarship. Oh well.
There was definitely more swearing than in TOTWTMIY, but romance and violence were all fairly clean (although there's mention of a college-age couple living together).

The Verdict: My words can't do justice to this book.

Buy: Read Between the Lynes  Barnes & Noble
Will I be adding this book to my library?: ABSOLUTELY. (It's preordered.)
Posted by Emma at 12:00 AM
Email ThisBlogThis!Share to TwitterShare to FacebookShare to Pinterest