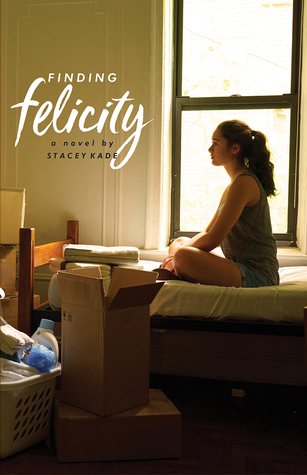 Finding Felicity by Stacey Kade
Grade: B-
Summary: Caroline Sands has never been particularly good at making friends. And her parents’ divorce and the move to Arizona three years ago didn’t help. Being the new girl is hard enough without being socially awkward too. So out of desperation and a desire to please her worried mother, Caroline invented a whole life for herself—using characters from Felicity, an old show she discovered online and fell in love with.

But now it’s time for Caroline to go off to college and she wants nothing more than to leave her old “life” behind and build something real. However, when her mother discovers the truth about her manufactured friends, she gives Caroline an ultimatum: Prove in this first semester that she can make friends of the nonfictional variety and thrive in a new environment. Otherwise, it’s back to living at home—and a lot of therapy.

Armed with nothing more than her resolve and a Felicity-inspired plan, Caroline accepts the challenge. But she soon realizes that the real world is rarely as simple as television makes it out to be. And to find a place where she truly belongs, Caroline may have to abandon her script and take the risk of being herself.
The Good, the Bad, and the Ugly: I saw this #quietYA title on a staff recommendation shelf at my indie bookstore in Richmond. It seemed interesting, so I decided to give it a try.
Caroline is that introverted character that I'm sure many readers will relate to. The characters were largely the best part of the book, but unfortunately, the pacing of Finding Felicity is all off. I'm pretty sure Caroline didn't get to college until like 40% in? And there wasn't any huge catalysts at the school to keep driving the plot along, just little character things that didn't feel significant enough.
Caroline's roommate, Lexi, had an interesting arc that felt cut off abruptly. At times Caroline's mother just felt so overbearing and cliche, like too many YA parents do.
I think the premise of operating off of a 20-year-old show could be a bit of a hard sell. I had heard of Felicity but knew next to nothing about it (at least Caroline does a good job of explaining it), so I'm not sure how many teenagers will relate to that. In general, though, the pop culture references never overwhelmed the story.

The Verdict: Unfortunately, a bit of a let down. Probably would've been better if it were more polished.