I actually had my last class on May 1, and my last final May 7. But I know several of you probably don't finish school for another week or so. So that's why this topic is happening today.
On May 7, I finished my first year at college. I have 35 credits under my belt, which is pretty exciting to me. I also made the Dean's List both semesters.

I don't want to complain. I want this post to be a reflection of my first year at Asbury. But I'm going to be very open with y'all because there have been loads of ups and downs that I haven't been able to properly vocalize yet.
Orientation week was a blast. I spent most of the mornings not feeling well (stress and nerves) but I honestly have the best TAG group, y'all. I continued to have dinner with one of my leaders into this semester (weekly TAG dinners were a thing for most of the group last semester), and I'm still friends with several of the people in the group. I kind of have to be if I'm writing a book with characters inspired by them. 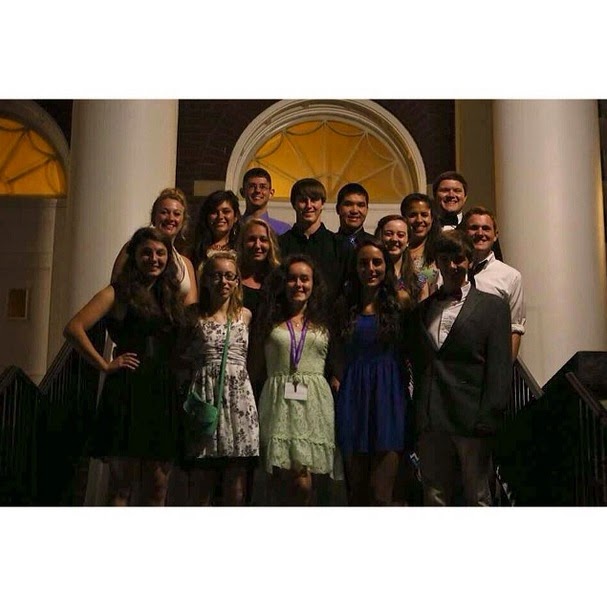 (Group picture from #classy, stolen from Shannon's Instagram. I'm pretty sure I was mid-blink.)

My roommate and I had a very rough start to our relationship after we were officially in the same room. There have been bumps in the road since then, and we've known since November that we wouldn't room together again after our freshman year. But she was there for me during a lot of my worst moments, and for that, I'm eternally grateful. Because of me, she's come to like Taylor Swift just a little bit more (she's going with me to see Taylor in Lexington in October), and because of her, I now have some of the best inside jokes. And I'm working on doing "the eyebrow thing." 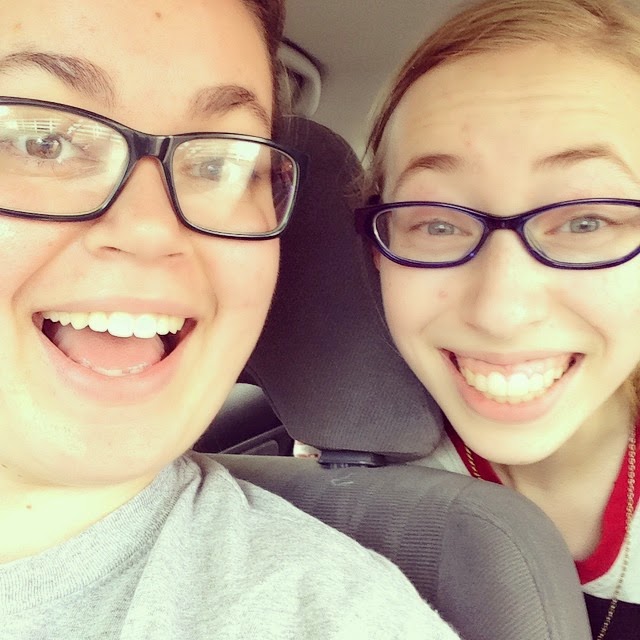 It's been hard, being 439 miles from home. I didn't get to go home or see any family or friends until Thanksgiving. That was really hard when all of my friends either went home or had family/friends come visit before then. I almost thought I wasn't going home at Easter (which I was going to be okay with until I found out all of my friends were going to visit one girl's grandparents); then, thankfully, I learned a girl from my hometown was making the 9-hour drive and was willing to take me with her. I spent a lot of time in the car that weekend, but I got to see my mom and my dog. I especially miss my puppy. He's always been my buddy, and he's getting old, so I worry about him. He started going blind after I came back to school for second semester, and he has diabetes.

My mom sent me a pic of my puppy, who I'll see tomorrow, to cheer me up. I've missed my cuddle buddy. <3 pic.twitter.com/kyKVFYOgFv
— Emma (@AwkwordlyEmma) November 22, 2014

There's some stuff that I haven't been allowed to be too open about. I touched on it briefly in this post in March. There's this girl in my life here at Asbury; I'll call her E. At first, I thought she and I were going to be really good friends. E was one of the few non-equine major students in my friend circle and, while I like horses, I can only hear so much horse-talk before I get bored. But then, in mid-September, I discovered that my whole friend group had been lying and keeping some major secrets from me. I felt excluded and hurt and angry. I've worked things out with all of them about that, but with E, it took a bit longer because it was mainly her I had the problem with and she wasn't trying to make amends properly.
We finally worked things out, although our friendship was more tentative. But as the fall progressed, I found she'd make snide comments to me, or snap at me for the tiniest things, or she just had a bad attitude in general.
Then, right before finals, we had a conversation over text. I won't go into the details of it, but basically, E wouldn't leave me alone and she wouldn't accept my answers or believe me, and it shook me up pretty badly. I found out later on that it had apparently been her roommate texting me, but E condoned it because she knew her roommate had her phone and was texting me. Because it was right before finals week, I couldn't do anything more than let my RA know. She wanted to talk to the ARD or RD, as well, but there wasn't time for that. So I had to sit and wait and feel uneasy for all of Christmas break.
And then, on New Year's Day, around 10 pm, I got a text from E. She accused me of prank-calling her and threatened to take the number that had called her to the police because prank-calling is apparently a felony in Kentucky. I was very shaken up by that accusation. So I texted a couple of my best friends at home, as well as my roommate. They all advised me to ignore her since E and I already weren't on good terms. Well, she texted me the day after and said she was taking my silence as a sign of my guilt. (I mean, for all she knew, I could've been on vacation without cell service, or hadn't gotten the first text, or something like that.) So I finally texted her back, told her it wasn't me, and that I didn't appreciate the threats. Her response was very condescending.
As soon as I got back to Asbury after break, I went to my RA and filled her in on these latest developments. She involved the RD immediately, who promised we'd have a meeting with E and her roommate and get this worked out. It took a few weeks for that meeting to happen, since the RD didn't prioritize it. And the meeting didn't go at all how I wanted it to. I was made to feel ridiculous, for how I felt about the texting harassment and for feeling increasingly uncomfortable around E whenever I was with our friend group. It is not fun to have your feelings invalidated.
My RD believes we left that meeting with everything resolved. I don't agree. E and I have barely talked since then (not that I wanted us to be best buddies, but I wanted us to both feel comfortable around each other).
That's all why I'm switching dorms in the fall. I'll live in the other girls' dorm, which is further from everything. BUT I'll be able to cook and bake more, I'll have a slightly bigger room, and I will no longer be under the jurisdiction of an RD who made me feel like crap for being stressed out and upset with another girl. I'm looking forward to having a new roommate (a freshman or transfer), and starting classes in my minor and taking more in my major, and working more hours at my job as the front desk worker at the athletic center (so yay for more money!). I'm also hoping to be the assistant director for Sophomore Musical.
I'm anticipating what God has in store for me for my freshman year, and I hope y'all will keep me in your prayers and thoughts. :)

This has turned out to be a very long post. So, if you've stuck with reading it, props to you.