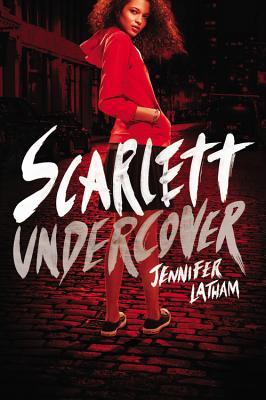 Scarlett Undercover by Jennifer Latham
Grade: C+
Release date: May 19, 2015
This e-galley was provided by Little, Brown for Young Readers via Edelweiss in exchange for an honest review.
Summary: Meet Scarlett, a smart, sarcastic fifteen-year-old, ready to take on crime in her hometown. When Scarlett agrees to investigate a local boy's suicide, she figures she's in for an easy case and a quick buck. But it doesn't take long for suicide to start looking a lot like murder.
As Scarlett finds herself deep in a world of cults, curses, and the seemingly supernatural, she discovers that her own family secrets may have more to do with the situation than she thinks...and that cracking the case could lead to solving her father's murder.
Jennifer Latham delivers a compelling story and a character to remember in this one-of-a-kind debut novel.

The Good, the Bad, and the Ugly: There's just something about teen private-eyes that I love. But when there's little plausible back story as to how he (or she) became one, then the story starts to lose some of its glow.
Scarlett is 15, and she's already graduated from high school. Her older sister, Reem, a medical student doing her residency, wants her to go to college. Scarlett instead wants to stay and keep helping kids and solving mysteries and hopefully find out who murdered their father. Overall, Scarlett Undercover was very fast-paced and kept me hooked, but it wasn't quite what I wanted. I was expecting more mysteries before we were thrown into the A-plot. Everything was connected and I couldn't quite buy that. I also couldn't buy that a fifteen year old would be given such freedom, even if her sister is busy and her parents are dead (and it was awfully convenient that both parents had bit the dust). And then, the book took a paranormal turn that I wasn't expecting (I think I missed that part of the synopsis). There was talk of jinn, and guardian angels, and some old myth concerning King Solomon. I wasn't a fan of any of that stuff. I was totally fine with the fact that Scarlett and many of the characters were Muslim (nothing about it was pushy, it was just matter-of-fact and the religion only played a small part into the book) but I don't do paranormal, controlling animals, etc. It was all just a bit too weird for me. The plot twist towards the end felt overdone especially when the revealed villain called someone a "fool."
Some foul language - several pretty much f-words with weird spellings. Romance was pretty clean. I don't think violence was too bad.

The Verdict: Sadly, not as great as I hoped.

Buy: Read Between the Lynes  Barnes & Noble
Will I be adding this book to my library?: I don't think I loved it quite enough.
Posted by Emma at 1:00 AM
Email ThisBlogThis!Share to TwitterShare to FacebookShare to Pinterest