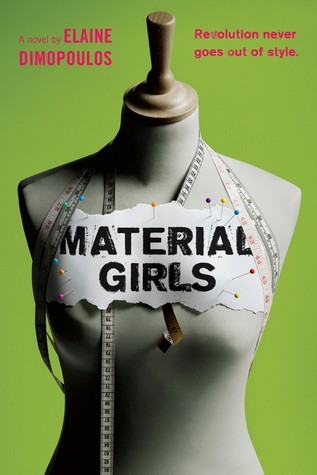 Material Girls by Elaine Dimopoulos
Grade: C-
Release date: May 5, 2015
This e-galley was provided by HMH Kids in exchange for an honest review.
Summary: In Marla Klein and Ivy Wilde’s world, teens are the gatekeepers of culture. A top fashion label employs sixteen-year-old Marla to dictate hot new clothing trends, while Ivy, a teen pop star, popularizes the garments that Marla approves. Both girls are pawns in a calculated but seductive system of corporate control, and both begin to question their world’s aggressive levels of consumption. Will their new “eco-chic” trend subversively resist and overturn the industry that controls every part of their lives?

The Good, the Bad, and the Ugly: I sat, staring at my screen, trying to decide what to rate this book and how to review it for a good fifteen minutes. It's such an interesting concept and creative idea, but in the end, it all fell a bit flat and felt too exaggerated to me. Let me explain why.
In some ways, Material Girls reminded me of Bumped by Megan McCafferty. There's a lot of made-up slang that's used a lot throughout the book, and it's a very satirical tale. And neither ended up being as good as I hoped, particularly Material Girls. It was a book I looked forward to and thought sounded cool. However, it lacked world-building. There were a lot of names and terms thrown around that I don't feel I ever properly understood. I couldn't decide if the world was futuristic or parallel universe or what. My guess is the former, but this was never confirmed. The end of the book didn't work well; certain things wrapped up too soon and then certain other plot points formed much too late. The ending seemed incomplete to me. Also, I never fully connected with Marla or Ivy. They seemed so two-dimensional to me with indistinct personalities. Perhaps that was the point - they're productions of their culture so they can't be unique. But I like to connect with the protagonist in some way.
There wasn't much foul language that I remember. I think romance was pretty clean, too (aside from sexy dressing and some heavy making out). There was some heavy prescription drug usage and some drinking I believe.

The Verdict: Ultimately, a disappointment.