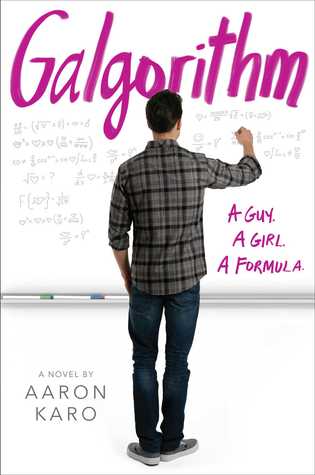 Galgorithm by Aaron Karo
Grade: C-
Release date: May 5, 2015
This e-galley was provided by Simon Pulse and Edelweiss in exchange for an honest review.
Summary: What if the secrets of dating and love were revealed in one simple formula? That's the tantalizing proposition high school senior Shane Chambliss offers the hopeless and hapless guys who come to him for relationship advice.

After the girl of his dreams breaks his heart, Shane devises a mysterious formula called the Galgorithm and establishes himself as the resident dating guru at Kingsview High School. But his attempts to master the art of romance go outrageously awry.

As Shane tries to navigate the ensuing drama, he must follow his heart, abandon all the rules, and ignore his own advice in a quest for true love. What he discovers, no formula could ever predict...

**Warning: lots of spoilers to follow**
The Good, the Bad, and the Ugly: Ehh....this is going to be one of those reviews where I can't passionately tell you to read or not read this book. However, I think you'll see my opinion sways a little bit more to the latter. I love romantic comedies, and I love a good YA fluff romance. But, unfortunately, Galgorithm wasn't quite what I wanted.
Shane's POV was fairly (surprisingly and delightfully) clean for a book narrated by a guy. There were a few crude moments but nothing too out of hand. However, he still had a typical guy attitude, especially when it came to his feelings for his best friend, Jak (and yes, that's a girl). He couldn't believe she didn't like him back (and of course she eventually did, but he pressed the point and couldn't let her be). He also called them soulmates. Since they're only high schoolers, I think that's taking a bit too far.
The fallout when it came to Shane's "business" with the Galgorithm was great, and I think all of that plotline worked well. It really saved this book, since I didn't buy into the romance between Shane and Jak at all.
Let me talk more about Jak. She's that best friend who was sooooooo different from other girls and really only hung out with Shane (who didn't really have that many other friends either...). She didn't like hardly anything, and she was apparently so great and different, but I didn't see it. Finally, Galgorithm majorly fails the Bechdel test (which I know is really just a film thing, but still). I don't really think about it a lot, but it was glaringly obvious in this book that few girls spoke to just each other about anything other than guys. *sigh*
Some foul language and some PG-13 romance.

The Verdict: Not really worth your time.