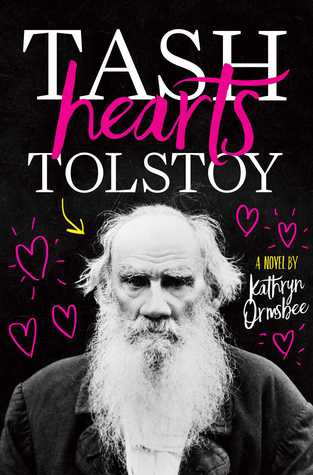 Tash Hearts Tolstoy by Kathryn Ormsbee
Grade: A
Release date: June 6, 2017
An e-galley was provided by the publisher via NetGalley in exchange for review consideration.
Summary: After a shout-out from one of the Internet’s superstar vloggers, Natasha “Tash” Zelenka suddenly finds herself and her obscure, amateur web series, Unhappy Families, thrust in the limelight: She’s gone viral.
Her show is a modern adaption of Anna Karenina—written by Tash’s literary love Count Lev Nikolayevich “Leo” Tolstoy. Tash is a fan of the 40,000 new subscribers, their gushing tweets, and flashy Tumblr gifs. Not so much the pressure to deliver the best web series ever.
And when Unhappy Families is nominated for a Golden Tuba award, Tash’s cyber-flirtation with a fellow award nominee suddenly has the potential to become something IRL—if she can figure out how to tell said crush that she’s romantic asexual.
Tash wants to enjoy her newfound fame, but will she lose her friends in her rise to the top? What would Tolstoy do?


The Good, the Bad, and the Ugly: There are, as of right now, three YA books I wish I'd written that I often call "the books of my heart." This is one of them. I was drawn to Tash Hearts Tolstoy by the mention of a literary-inspired web series. Sometimes my gut instinct telling me a book sounds phenomenal is wrong; sometimes it is right.
Tash as a protagonist was wonderful. She grew in little ways and acted like a teenager to me. She tried to be a good kid and a kind person, and I appreciated that. The cast of supporting characters is a bit large, between Tash's parents, her sister, Thom (the crush), her best friends, Jacklyn (Jack) and Paul, and the cast of the web series. I did have trouble keeping some of the more minor characters straight, but Tash Hearts Tolstoy focused nicely on Tash, her family, Jack, Paul, and Thom. The friendship between Tash, Jack, and Paul was great. It wasn't idealized and perfect; Jack frustrated Tash at times (in fact, she frustrated me), but I think that comes with the growing pains of being seventeen/eighteen. I called certain spoilery things about Paul from the start, but I think I liked where that plotline went at the end.
The web series bits are great fun, and I wish Unhappy Families was real. The author previously worked on a web series, so her firsthand experience shows and really makes for authentic descriptions. Tash gives a lot of information all at once explaining how the show came to be, but it didn't feel like info-dump. Sometimes it's good to reveal all the information at once, just so readers aren't confused.
Tash Hearts Tolstoy is also about Tash watching her older sister, Klaudie, handle the summer between graduation and college, and then figuring out herself how her plans for the future might be changing. I liked how the Zelenka parents encouraged Tash to pursue her dreams...just reasonably. I also felt like I got to know her mom and dad pretty well, and they were great parents for a YA book.
It surprised me how long it took to get to the Golden Tubas awards show, but that ended up being the climax of the book, which worked nicely. Thom fits into the conflict, and I wasn't feeling too weird about him until then, so maybe a few hints earlier on might've been nice (besides Tash's friends feeling uncertain about him).
As far as I know, the scenes about Tash's asexuality were good and accurate. It was revealed slowly, with little hints, and I thought the on-page reveal came about quite organically instead of it being a forced thing where Tash is basically just telling the readers.
Another thing I noticed: the tone and narration voice are different from Kathryn Ormsbee's Lucky Few, and I liked the tone in Tash Hearts Tolstoy better. I liked Lucky Few, too, but I connected with Tash Hearts Tolstoy more.
The only things that keeps me from giving this five stars is the amount of foul language (not my thing, y'all) and the focus on Buddhism; I appreciate the religious diversity, but Buddhism just isn't my thing either.

The Verdict: Quiet, but in the best way possible. Also, my desire to read Anna Karenina has grown exponentially.

Buy: Read Between the Lynes  Barnes & Noble
Will I be adding this book to my library?: Absolutely. It's preordered and everything.
Posted by Emma at 12:00 AM
Email ThisBlogThis!Share to TwitterShare to FacebookShare to Pinterest