Mae govannen, everyone! This is Sarah from Dreams and Dragons! I’m super-excited to be guest posting this week, especially since I love the theme: book character costumes! I love dressing up as characters from my favorite books (and, occasionally, movies and other fandoms), even though I don’t get to do it very often. So, for this week’s post, I’ll be talking about some of the characters I’d love to go in costume as. 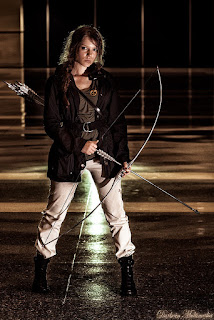 1. Katniss Everdeen (The Hunger Games.)
I’d probably do something like her hunting outfit as seen in the first movie, since it’s pretty easy: black or brown shirt, hiking pants, brown jacket, Mockingjay pin, and, of course, bow and arrow, plus her across-the-head braid (even though she technically didn’t have the pin until after the Reaping or the braid until the Capitol interview). I can kind of do the braid myself . . . or I can ask my sister to do it for me, since she can have it done perfectly in about five minutes. Doing something more complicated- one of her interview outfits, for example, or her Mockingjay armor, would be fun too, but if I’m going to go to all that effort, I’d rather do a character other than Katniss. For example . . .

2. Arwen, Eowyn, or a random elf (The Lord of the Rings).
Confession: I actually got to do the ‘random elf” option for some of my senior pictures, which was super fun. I wore a black skirt, flowy purple top, brown boots, and my Lorien cape, and had my sister do my hair in an elvish style. Perhaps it wasn’t traditional elven garb for Middle Earth . . . but it was close enough. Arwen  or Eowyn would be fun too, though I’d have to actually make or buy a dress to do that option. So, unless I suddenly have a lot more opportunities for costume parties (or I start going to a church where Eowyn’s white and brown dress wouldn’t look terribly out of place, paired with more modern accessories), I’ll content myself with just being a random elf. 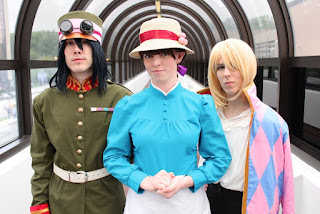 3. Sophie Hatter (Howl’s Moving Castle).
I really want to find an opportunity to do this one sometime- but preferably when I’m a few years older and I have a boyfriend who’ll dress up as Howl for me! I’d probably dress as the movie version of young Sophie, since book Sophie has red-gold hair and movie Sophie has brown like I do. Still, it would be a simple costume: grey, blue, or sea-green dress (depending whether you’re going off the book or the movie for appearances), apron, and hat. 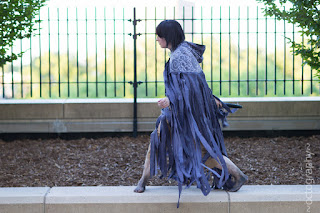 4. Vin or another Mistborn (the Mistborn trilogy).
I probably wouldn’t be able to pull off Vin, really, but I could play another random Mistborn well enough. A Mistcloak- easy enough to make, it’s just a black or grey capelet and then cape-length ribbons in shades of black and grey sewed in layers along the edge- and dark, practical clothes, along with one of my Misting vial necklaces, would be all I’d really need. Or, if I wanted, I could play Marasi or another Roughs-era character, with a Victorian-style day dress or Mistcoat (sort of a combination of a duster-style coat and a Mistcloak), white shirt, brown pants or skirt, and a Western-style (fake) pistol and belt. 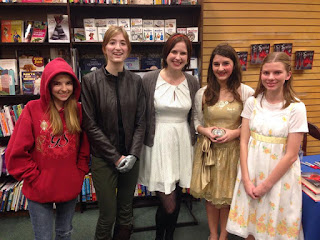 5. Various Lunar Chronicles characters.
Plenty of options here! I’d probably dress up as Cinder, since we’re closest in appearance. She’d be pretty easy: cargo pants, practical shoes, a tank top and work shirt, and, of course, work gloves. Of course, I could also try to pull off Levana or a random member of the Lunar Court, with an over-the-top glamorous outfit and hairdo. If I had a different hair color, of course, or felt like dying my hair, Scarlet (red hoodie, jeans, sneakers) or Cress (a cute dress and bare feet) would be pretty simple and fun too. (Also, on a sidenote: we need more Lunar Chronicles cosplay, because when I googled it to search for what people had already done, I came up with pretty much zilch.)

6. One of my own characters.
Cheating? Maybe. But I, like a lot of bookworms, am also a writer, and even if no one else knows who I’m dressing up as, it’s still fun. (Plus, some of them I can dress like on normal days and not get looked at like an unusually crazy person- always a plus!)
What book characters would you dress up as if you could? Tell me in the comments, or share in your own Random Fridays post!
Thanks to all of you for reading, and thanks to Emma for having me as a guest host!