Review: My Secret to Tell 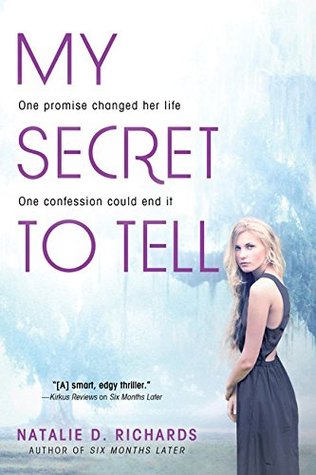 My Secret to Tell by Natalie D. Richards
Grade: C-
Release date: October 6, 2015
An e-galley was provided by Sourcebooks Fire via NetGalley in exchange for an honest review.
Summary: Emmie's had a crush on her best friend's brother forever. Deacon is the town bad boy who's always in trouble, but she sees his soft side when he volunteers with her at the local animal shelter. She doesn't think he's dangerous…until he shows up in her bedroom with blood on his hands.

Deacon's father has been violently assaulted and Deacon is suspect number one. Emmie's smart enough to know how this looks, but she also knows Deacon's biggest secret—he's paralyzed by the sight of blood. She's sure he didn't do this. Or did he? Because even Deacon's own sister thinks he's guilty…

The Good, the Bad, and the Ugly: Mystery/thrillers can be really fun. However, they need a solid, interesting plot and convincing characters to work well. Unfortunately, I guessed part of the mystery in My Secret to Tell quite early on in the book, which lessened my enjoyment of the big reveal.
The dialogue in many instances sounded too fake. I don't feel like many teenagers talk like Emmie and Deacon did, so it just seemed unnatural. In addition, they as characters were just very blah to me. I didn't connect with either of them (or any of the secondary characters), and to be honest, I didn't care what happened to them.
Richards's book Six Months Later is very memorable for me, and I definitely remember parts of Gone Too Far. But I'm writing this just a few days after finishing My Secret to Tell, and I remember very little of it. I know Emmie's parents are separated but they still have family meals together occasionally. They're also very overprotective...as YA parents often are when they're present. Emmie's brother is mentioned a lot, yet never appears. Emmie working for Joel seemed weird. And the way the sheriff was targeting Deacon? It just felt over the top.

The Verdict: Overall, I'd suggest passing on this one. Richards's previous YA titles are better.