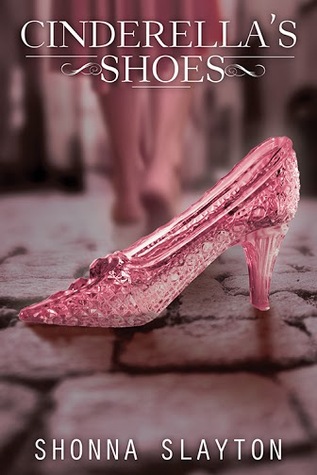 Cinderella's Shoes by Shonna Slayton
Grade: C+
An e-galley was provided by Entangled: Teen in exchange for an honest review.
Summary: The war may be over, but Kate Allen’s life is still in upheaval. Not only has she discovered that Cinderella was real, but now she's been made Keeper of the Wardrobe, her sole responsibility to protect Cinderella’s magical dresses from the greed of the evil stepsisters’ modern descendants.
But Cinderella’s dresses are just the beginning. It turns out that the priceless glass slippers might actually exist, too, and they could hold the power to reunite lost loved ones like her father—missing in action since World War II ended. As Kate and her boyfriend, Johnny, embark on an adventure from New York to Italy and Poland in search of the mysterious slippers, they will be tested in ways they never imagined.

The Good, the Bad, and the Ugly: My first thought is why are the shoes on the cover pink? The shoes in the book are expressly clear diamonds. Ah, well, that's me being nit-picky. Anyways, onto my actual review.
I enjoyed that Kate's story continued. Most of this sequel focused on Kate searching for her father, her developing relationships with Nessa and the girl's family, and finding the famed glass slippers. Cinderella's Shoes was 400 pages, which I think was way too long. The plot could've easily been wrapped up in 300 pages, but there was needless plot about the movie Johnny's father was making and unnecessary romance drama, even though the romance is barely a subplot. I also thought several parts of the plot were too convenient. Things were resolved too easily; there were few consequences and little lost for the protagonist and the secondary characters. I wanted more excitement and risks. In addition, I thought it would be exciting to see Italy, and especially Poland, through Kate's eyes but the setting hardly comes into play, which was disappointing. At times, I even forgot where the characters were.
Language was mild, as was violence and romance.

The Verdict: Kind of good, but still needed some work.

Buy: Read Between the Lynes  Barnes & Noble
Will I be adding this book to my library?: It's on my Secret Sister wishlist, so maybe.
Posted by Emma at 12:00 AM
Email ThisBlogThis!Share to TwitterShare to FacebookShare to Pinterest